Regulation of toxin production by CodY 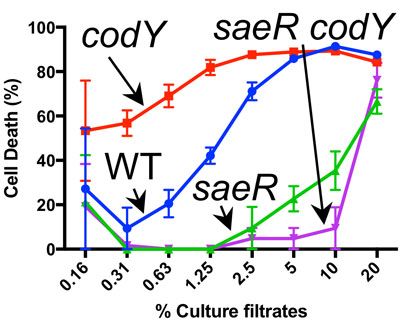 S. aureus is incredibly versatile and is capable of causing disease in a variety of tissues. At the heart of this response is the SaeR/S Two-Component System (TCS), which contributes to the regulation of over 20 virulence factors including secreted toxins, and is under the control of CodY. In collaboration with Victor Torres’ lab at NYU School of Medicine, we revealed that CodY suppresses the ability of S. aureus to kill human neutrophils by controlling the activity of the SaeR/S TCS (right, data courtesy Will Sause, Torres lab). Paradoxically, we discovered that CodY directly and indirectly regulates the Sae P1 promoter, which drives the expression of inhibitor proteins that act to shut off the SaeR/S system. Currently, we are interested in identifying which secreted proteins are responsible for cytotoxicity, determining how the nutrient depletion signal and host cues (sensed by SaeR/S) are integrated into the virulence regulatory network via Sae, and understanding the strategy by which CodY acts to turn on and off the SaeR/S system simultaneously.